Summary: Leo is a transporter, someone who moves goods between the many levels of the Suspended City. He took this job for one reason only: have the chance to get to one of the castles floating above the city and see from up close one of the "Gods" who live there. Today, he can finally do that.
THE MAN IN THE HIGH CASTLE

Nobody knows exactly how it happened or why. The evidence of the climate collapse went lost in the aftermath and all that were left were scraps of newspapers and books. Fragments of pages now preserved in the Churches with the fervor of faith. The years after that are a bit of a blur, and all everybody knows about them is what the Book says: that the mist dissipated and They were there, and with them the castles in the sky.

Leo is not a big fan of the Book as it seems slightly too vague to him. All the gospels say is that after years and years of despair and near starvation, after everything was water and the air itself was burning, They came to bring salvation, and They were gods. That's exactly how it's written: and They were gods. Leo knows that part by heart as he was forced to recite it every morning before breakfast and every night before bed at the orphanage. Luckily, last year he was finally too old to stay there and the Archimandrite threw him on the streets with a tiny bag of coins and a pat on his back.

Some people would be worried to be on their own at fifteen, but he considers it a blessing. At least now he's free to get away from the church if he wants to. Not that he dislikes faith in general. He understands why people need it and, in his own experience, those who believe in the Gods for real are usually very kind and centered people. It's just that religion is not his thing because it doesn't explain enough to him. He can't believe something just because a book says so. He doesn't work that way. He would like to know how the waters retreated after all the ice melted. And how the Suspended City was built to escape pollution. And how the castles in the sky can float as they do. Knowing that everything was possible because of the Gods doesn't even come close to an explanation to him. In fact, he would also like to know who these so-called gods are and where they came from.

That is why he bought himself a vehicle and started working as a transporter in the lower levels, which wasn't exactly a piece of cake as pollution is at death-level there and, if you're not smart enough, you can die before moving up the ladder. But he rides fast and he's not afraid of taking risks in the constant traffic jam of the Suspended City – reckless, they call him – so he quickly worked his way up to the surface in less than a year. He's been transporting real goods instead of coal (or worse, radioactive material) for three months now and finally today he's got his big chance.

The castles in the sky are not a figure of speech. They are real, proper castles, made of a whitish material that shimmers with sunlight. There are four of them and they float constantly around the Suspended City, each of them following a different orbit. The people living in those castles are not invisible beings who rule over the crowd of their believers from a distant plane of existence. They can be seen, they speak and, someone told Leo once, they can even be touched as they have servants who tend to their needs. Leo doesn't know what kind of people they are – if they are even humans or not – but they are people and so they must need things like everybody else. Food, for example. Or clothes, because they don't show themselves butt naked. And, unless they are able to magic everything into being, something Leo doesn't believe they can do, then they need someone who brings those things to them as they never come down and set foot on the Suspended City, not even on the top level which is relatively safe.

Leo asked around for months to find out who was supplying them, how, when and, most of all, if they were hiring, and finally the right name came his way. This guy Burt owns a small business that officially sells stuff to street people on level four, but makes most of its income by dealing in secret with the people above. And he is conveniently one man short, as his own son had no intention on following in his father's footsteps and ran away with his lover. Burt doesn't trust Leo at all because he was a low transporter – he even said that to him – but decided to give him a chance anyway, which is good enough for Leo. He will prove the man that he's the best, most trustworthy transporter that the Suspended City has ever seen.

The trip to the castle he is assigned to isn't as long as he had imagined but he's forced to move by night, which is logical but highly inconvenient. Except for that, tho, it's pretty easy. Following the instructions, he parks the vehicle in the hangar, where a man glares at him and asks him for his permit, before grunting and letting him pass. He grabs the tiny box Burt entrusted to him and enters the castle. The place is way bigger than it looks from below and incredibly empty to be this big. He has seen just a couple of maids around, and they all scattered away quickly with their heads down. There's a weird silence, even for the late hour and he has absolutely no idea where to go. A butler or a housekeeper of sort would be nice. He's turning a corner when something hard slams into him, throwing him on the ground.

He looks up to find a man towering over him, frowning. There's no doubt he is one of Them as he's wearing their black cloak, but he looks less shimmering than he's used to see them. He looks normal, almost. “I-I am sorry, sir. I was looking for a—“

But the man doesn't let him finish. He grabs him by his wrist – strong grip, definitely real – and pulls him up. “You are not the usual delivery boy,” the man says, his golden eyes very disapproving. “And you're late.”

And if that's the beginning of his new job, Leo doubts it's gonna last very long. 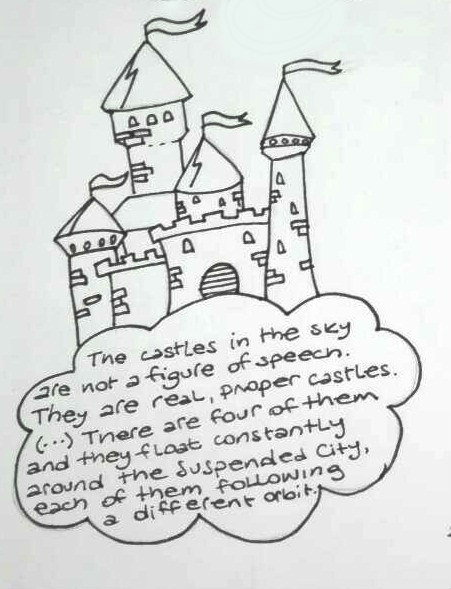